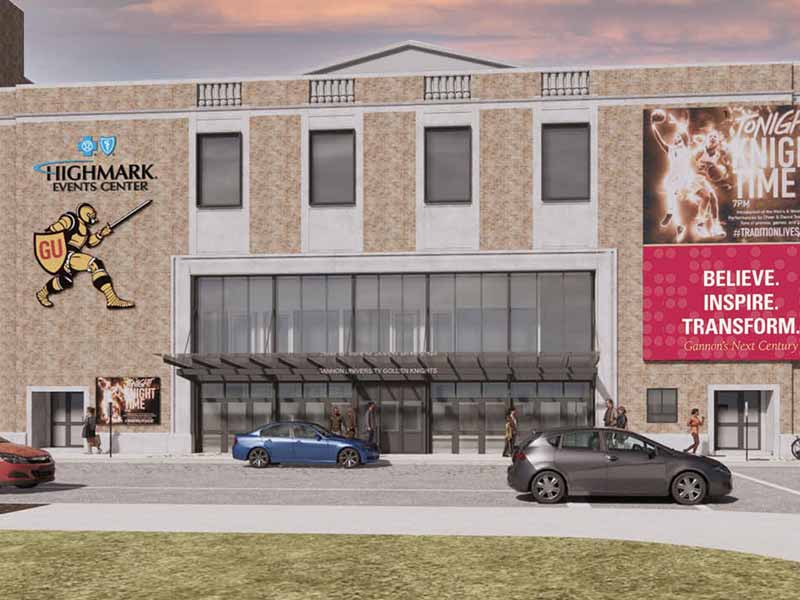 The home of the Gannon Golden Knights is about to get a new name: The Highmark Events Center.

Officials from Gannon University and Highmark joined today at the center to announce that Highmark has signed a 10-year agreement for naming rights to the center – formerly known as the Hammermill Center – further expanding the long-standing partnership between Gannon and Highmark.

Highmark is one of America's leading health insurance organizations and an independent licensee of the Blue Cross Blue Shield Association. Highmark Health is the parent company of Allegheny Health Network and Erie’s AHN Saint Vincent Hospital.

The leadership investment from Highmark will support renovations to the 36,560-square-foot center, which is home to the university’s basketball, volleyball, wrestling, acrobatics and tumbling, and competitive cheer teams. The Highmark Center renovation is expected to exceed $10 million with major changes planned for the inside and outside of the center.

These two area anchor institutions will create another visible change to the downtown landscape and Perry Square. The facility has been the front porch of the university’s Erie campus for 70 years, drawing crowds of up to 2,800 people not only for athletic events but for many other community lectures, concerts, camps, events and programs – all bringing people downtown and supporting our regional small businesses and economy.

Gannon and Highmark have been working together to improve our city, our downtown and our region on several initiatives.

Gannon is also leading the region in developing the next generation of the health care professional workforce, including several health educational partnerships with AHN Saint Vincent Hospital. The hospital also provides sports medicine services, a team physician, and student health services for Gannon.

“For more than 75 years, Highmark has been committed to making the Erie region a better place to live, work and play,” said Jim Teed, vice president of Regional Markets, Highmark Inc. “We are very excited to enter this partnership with Gannon University to advance and elevate what is truly a hub of athletic activity and a landmark in our downtown area.”

“We are proud to continue our tradition of serving the downtown Erie central core through our engagement in the EDDC as well as our passionate commitment to our neighbors and neighborhoods in Our West Bayfront,” Gannon President Keith Taylor, Ph.D., said. “We are excited to expand our partnership with Highmark as we work toward transforming the lives of those we serve and focus on our responsibility to improve the world around us. This next generation in the long tradition of this facility is great for Gannon, for our Golden Knights and for the City of Erie.”

The facility has been the home for Golden Knight teams since the basketball programs began playing there during the 1949-50 season. The facility was originally known as the Gannon Auditorium and affectionately referred to as “The Audi” by longtime Gannon faithful. The facility was rededicated and renamed the Hammermill Center – “The Mill” – in February of 1983 in honor of the wonderful generosity of the then Hammermill Paper Co.

This project is a signature in Gannon’s Believe. Inspire. Transform: Gannon’s Next Century campaign, adding to the momentum toward the $100 million goal.